There are 7 episodes with tag 'architecture'   Clear search
#460 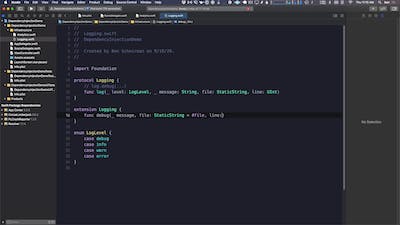 Managing dependencies can be a pain. Unless you're using shared instances accessible everywhere, you end up having to pass along dependencies from class to class. One strategy for decoupling your types from external dependencies is to create protocols and "inject" the actual concrete implementations at runtime. This enables you to test them easily and also isolates library-specific APIs from the rest of your application. This can make switching between libraries more feasible. In this episode we'll take a look at a library called Resolver that does this. Technically it implements Service Location rather than Dependency Injection, but the result is similar.
#274

In the refactoring series, Soroush mentioned a protocol he uses to make initializing view controllers from a storyboard as easy as adopting a protocol (and completely type-safe). In this episode we will build this using Swift protocol extensions. The end result is something you can easily carry with you from project to project.
#272

This episode wraps up the refactoring series by implementing the transition to the PhotosViewController. Ben and Soroush talk about the overall process and benefits of coordinators as a pattern to clean up view controllers and organize logic around how your app is stitched together.
#271

Moving on to the next segue in our storyboard, this time Ben and Soroush tackle the Add Review flow. They discuss naming of delegates, the ideal place to perform logic such as preparing a model to be saved and where mutations to the model live. They end up with a view controller that is completely decoupled from the AddReviewViewController and a better picture of what the coordinator tends to look like.
#270

What is the Coordinators pattern, and why is it useful? Soroush and Ben discuss this and then get started refactoring an existing application that uses Storyboards into using Coordinators. We implement our first AppCoordinator and wire it up on launch.
岛国av无码免费无禁网站_岛国在线无码免费观_岛国一区二区三区视频在线